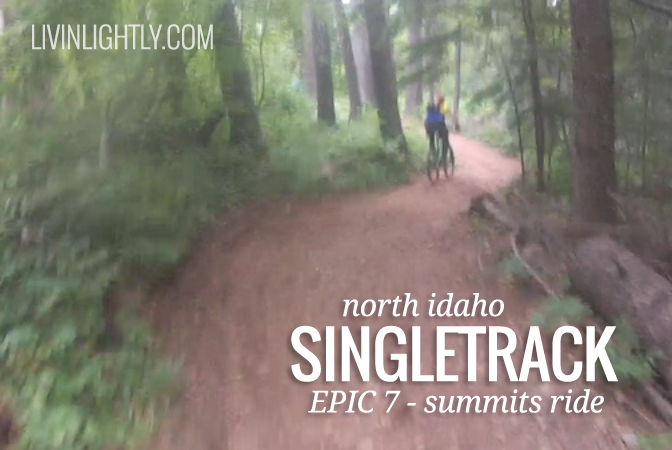 I love adventures — especially adventures on bikes! Two years ago one of my riding buddies had embarked on a 1-day epic ride stretching over 50-miles summiting 7-mountains and climbing over 10000’ between Hayden Lake and Lake Pend Oreille, Idaho. The ride took over 8hrs and as I listened to the report of grand vistas and remote singletrack I was drooling. We promptly made plans to repeat the adventure and set a date for the following summer.

As the date began to get closer I got nervous. The summer was chaotic to say the least. We added a baby in June and did a series of house sitting stints from June to July. I didn’t get out on my bike as much as I wanted too before the long ride and felt nervous about my performance. I knew I could complete the ride but I was questioning whether I could keep up.

I am a decent rider. I raced mountain bikes in high-school and college and had more podium finishes than not. Over the years (with a largely sedentary adult life) I have lost a little of my cardio edge. When riding with friends in the Northwest I am generally taking up the rear. My hometown is full of Ironmen and ultra-athletes and the fellas going on this ride were no exception.

Since my cardio ability could not be increased in a few short weeks the only aspects I could prepare for was getting the proper rest before, good hydration, nutrition and packing the right gear. This is what was on the menu for the ride and the gear I packed:

We started around 8am and rode our bikes to the trailhead. The first peak was Canfield. Instead of taking the easier route to the top of Canfield we went directly up Big Tree trail. This is one of my favorite trails…to come down. It’s pretty steep and technical and going up was pretty brutal especially for the beginning of a 50mile ride!

Canfield Mountain is an ORV area and its bursting with endless rabbits trails. On our approach to to East Canfield we had a little detour and went several miles in the wrong direction and had to backtrack.

Huckleberry Mountain gets it’s name from the abundance of the wild fresh little blueberry bushes. We made frequents stops to glean some ripe sweet berries. The trail up this peak was pretty steep and rocky. Once we got to the top we rested a bit and ate lunch.

Spades Peak is a home to a vintage fire tower lookout. It’s currently still standing and if you can make it to the top the views are grand! Time, negligence and stupidity have had it’s toll on the old tower. One leg is half chopped as if boyscouts were turned loose and the guy wires are loose and sagging. The poor structure will soon only be a memory. The approach to Spades was a long forest road grind.

From Spades to the South Chilco climb is some EPIC singletrack. Fast, flowing with the occasional water break hump that would send you airborne.

On South Chilco assent there is a Strava segment and several of the guys wanted to put up a good time. So they raced up the mountain. I could care less about a time and I slowly spinned my way up. The climb is fairly technical and moderately steep. I hit a wall 1/3 the way up and had to walk for long sections. By the time I got to the rocky peak the guys were thoroughly rested and ready to go. The views at the top of the Chilcos are GRAND!

To get to the actual peak of North Chilco you have to hike up roughly 1/3 mile over a massive loose rock garden. The hike was worth it!

The road to the top of Bernards is a long fairly steep forest road. At this point we were all running low on water (Some of the other guys had long runout and I had shared a fair amount of my gallon reserves). On the grind up there was a little drainage that we were able to filter water from. This cool water was SO REFRESHING! Once at the top of Bernard the descent is 8-miles of fast flowing downhill with rolling, hard packed pine duff under massive trees. Despite my exhaustion it was all I could do but smile and enjoy the ride down.

At the bottom we had shuttled a truck that would carry us home. I’m looking forward to this adventure next summer! Maybe I’ll be in a bit better shape.

Note: the video quality is less than ideal…the helmet mount to my gopro could not be found so I had to rig a mount and it wasn’t the most secure so the footage is a little shaky.