Before You Buy a Vintage Airstream Read This! 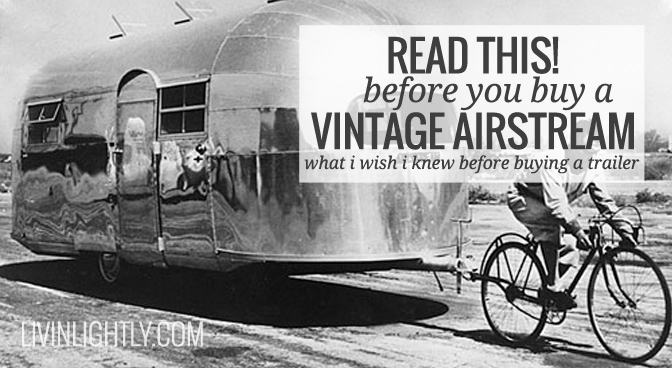 Airstream’s are an iconic piece of American history and the idea of owning and traveling in one is becoming more and more desirable. A quick look on craigslist or ebay will unearth a gamut of seemingly cheap and outrageously priced trailers — all in the same spot. Fully restored trailers that are polished and shiny, stock trailers that seem to be solid but just a little dirty and gutted trailers that are, “ready for restoration”. What do you look for when shopping for a vintage travel trailer? How do you know what a trailer is worth? How much will repairs cost? How much should you pay? When should you walk away?

In this article I will answer these questions as I share my experience being a complete newbie and buying a vintage Airstream, what I learned in the process and what I wish I knew before buying our 1966 Airstream Overlander.

Before purchasing our trailer we looked at a handful of trailers and they were all junk. They were either partially gutted, neglected, in need of major repair or all of the above. I regularly kept my eye on craigslist. It seemed like trailers that were complete were priced at a minimum of $3500. Even the junk we looked at was $2k. Until one day I came across this listing:

1966 Airstream Overlander. All original. Everything Works. $2750

The pictures were vague so I called the guy to take a look.

Upon first inspection everything looked original and complete. It was fairly clean and while it had some dated decor (sunflower curtains, wolf blanket and dingy carpet) it looked to be in great shape! The seller said all the components functioned.

The exterior had a few dents and one long scratch/dent on the drivers side. But considering the other trailers we looked at this appeared to be a deal!

We tried to negotiate on the price. The seller said he wasn’t going to budge on the price and he had a several potential buyers from Seattle to Montana en-route to see it. While we were looking at it several people called to enquire about it. Scarcity crept into our minds, so we paid the asking price and drove it off before anyone else could.

Since we thought the trailer was in good original shape we had only planned on some minor updates. We planned to remove the carpet, make the kitchen counter a bit longer and add a dinette. Some paint, new upholstery and a new counter surface. We originally planned on these items taking 2-3 months and we budgeted $2500 for the updates.

As we started the renovation we found major floor rot in the rear of the trailer underneath the bathroom bench. So much rot in fact there was hardly any signs of remaining wood for a large swath of the rear of the trailer. As I began to research on the forums I found that this is a common problem for these trailers. I also learned that these trailers are built from the back forward so to replace this section of floor we needed to gut the majority of the interior.

A little speed bump in our plans be it seemed doable…

So we fastened the drill bit and began removing rivets and internal components. The deeper we got the more issues surfaced…

I worked for almost a solid 2-months getting these issues squared away. The new floor was in, the body panels back on and I thought I could begin to see light at the end of the tunnel as interior cabinets were next on the list. For me this was going to be the fun part!

Until it started to rain that Fall…

It hadn’t rained much all summer and as Fall approached we got our first major rain. After the rain I went out to the trailer and to my horror I found water seeping in on my new floor! I scratched my head and spent several days sealing anything and everything I could think of. Finally I gave up and decided to take back-off the interior panels to try and see where the water was coming from.

Come to find out the trailers front passenger side had a major repair done. The lower panels were replaced and the installers used olympic pop-rivets with rubber gaskets. These gaskets broke down over time leaving a gap and dozens of places for water to seep in. To stop most of the leaking I had to drill out all the pop rivets and replace with solid buck rivets.

Our Airstream renovation seemed to be a never ending list of problems!

What did I learn from this experience renovating our vintage trailer?

Learn as much as you can before taking the plunge. Look at as many trailers as possible. Talk with Airstream owners (that aren’t trying to sell your their project). Watch videos, read forums. The Airforums is an awesome place to get answers and has a wealth of information anything Airstream. The VAP (Vintage Airstream Podcast) is a great resource! There are 100’s of episodes talking about most things on a trailer. I listened to episode-after-episode while doing repairs on our trailer and it was an invaluable education!

Often we see what we want to see. And we justify the reality to get what we want. In retrospect I did see some of these issues.. but I wanted a trailer and this one was much better and cheaper than anything else we had seen. Stay away from the scarcity mentality…there are many suitable trailers…even if it takes more time to find the right one.

If we would have saved what we put into materials into our trailer we could have bought a much less needy trailer. Then there is your time to think about…I spent 100’s of hours (many of them stressful) renovating our Airstream. We had to stay with family and couldn’t travel because of the repairs. If we would have waited we could have found a trailer that we could have moved into much sooner.

THINK LONG AND HARD BEFORE BUYING A PROJECT!

For most people I don’t recommend buying a project. Repairs take skill, time and money. It’s better to find a trailer that has either had repairs done already or checks out solid. For some (that have the time, money, space and expertise) a renovation may make sense. But go into it with both eyes wide open!

As you shop for and find your perfect vintage trailer be as educated, informed and intentional about what you want/need before you buy. Ask questions. Test. Know and understand what you’re looking at.

Before Pictures of our 1966 Airstream Overlander 26′