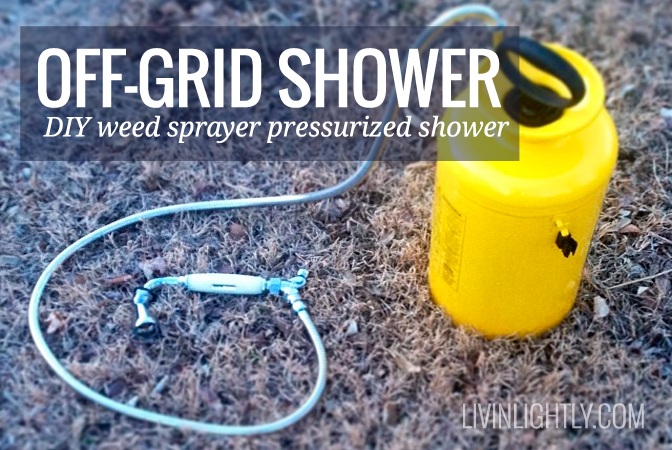 Looking for a simple, affordable DIY solution for a Off-Grid hot shower? We were too! Read on for our simple solution plus parts and plans to build your own off-grid pressurized weed sprayer shower.

The first year of living in the Airstream we did not have a shower. We either showered at the gym or did makeshift sponge baths over the sink. This setup was less than ideal!

The original hot water heater in the Airstream was missing parts and had a huge bulge (probably from improper winterization) so it was gutted and scrapped. Our original fiberglass tub had holes and needed repair. With a limited budget and other priorities for our cash we did not want to spend $600-$800 on a hot water heater. So we began looking at other simple, affordable options.

Our ultimate goal with the Airstream is to make it self contained and sustainable as possible (link). We don’t want to be dependent on fossil fuels like propane and we want to have the option to park anywhere and carry on life as usual with heat, power, hot water, refrigeration, etc. So a non-propane solution is ideal!

One simple off-grid solution is a solar shower bag. A dark colored simple bladder fitted with a nozzle for a solar heated, gravity feed shower. It’s cheap and functional and we considered this as a temporary option. But this solution is less than ideal when sun and outside temperature are low. We have the option of heating water on another heat source, fire, propane stove, etc but boiling water + a plastic bladder don’t play we’ll together. Plus a several gallon hanging bag inside our tiny shower is less than ideal. So I began searching for other options.

I had seen a small portable shower & ($30) with a hand pump for washing off sand after surf sessions. The tank was pretty much a weed sprayer with a shower nozzle and valve. The tank could be heated from the sun or it had a neoprene cozy so you could fill it with hot water before you left home then keep it insulated and warm for future use.

This looked like a great solution for the Airstream! The pressurized tank would have better flow than a gravity feed bag and we would have more head room in our already small shower compared to a bag. Until we got a sustainable water heating source (solar heater or wood stove boiler) we could heat water on our stove then pour it into the tank.

The weed sprayer shower is identical to the commercial surf showers. We opted for a weed sprayer DIY version because we could get a bigger capacity and custom fit a shower nozzle and cord to fit our needs. The cost for a DIY version is a bit more than a surf shower but you get a lot more versatility and durability if you put it together yourself.

The weed sprayer show is really simple, affordable and greatly improved our standard of living in the Airstream! These showers are great for: camping, prepping, emergencies, washing pets…anywhere you need a simple off-grid shower. Here are the components for the shower: 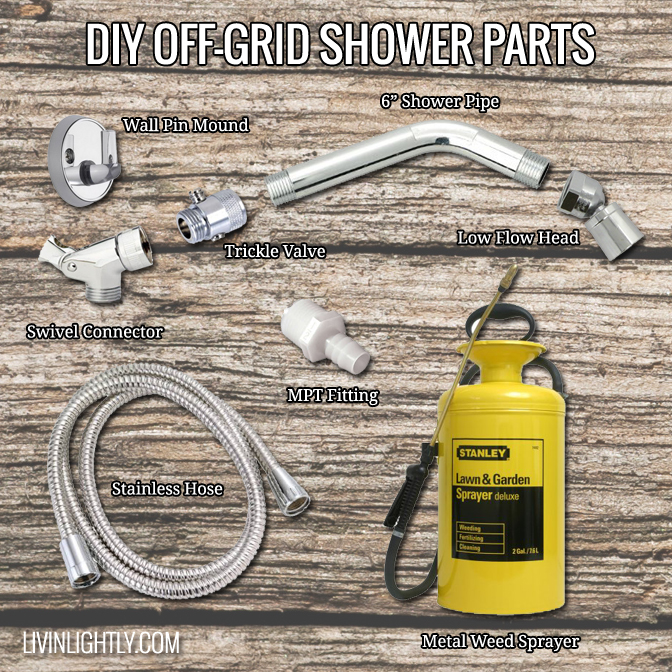 Here are the parts we used for our setup and the total cost.

I would not recommend a used tank. Even when thoroughly washed chemical residue could stick around for a long time. Besides new tanks are pretty cheap considering the potential risks. We opted for a metal Stanley Tank. I reasoned it would be more durable, I could have it powdered coated black for passive solar heating in the summer and pouring boiling water directly into the tank would not be an issue. Plus in a pinch I could place the tank directly on a open fire for emergency water heating.

The Stanley tank has worked well but it’s starting to rust and the paint is separating at the top. Stripping the existing paint then powder coating may remedy this. We shall see…

You will need a way to connect your shower hose to the tank. The simplest way I found is to cut the existing hose leaving 1″ then inserting a 1/4″ x 1/2″ MPT fitting. I just cutoff a chunk of the existing hose then visited my local hardware store to ensure I got the proper fit.

Any shower hose will do…the size is pretty standardized. They make plastic hoses and more quality metal lined hoses. I opted for the latter because I liked the look better and thought it would be more durable. The length of the hose will depend on your particular setup but 5-6′ should be plenty for most situations.

We reused the shower wand from our Airstream. It looks cool, coupled perfectly with the shower hose and nozzle and had fittings inside the shower that the wand hung on for hands free use. It’s tough to find a shower wand that will accept a low flow head. You can rig one together with the swivel connector + a short section of shower pipe. Parts are shown in the image above. The wand pictured is almost an identical replica of the one we have in our Airstream. It comes with a trickle valve + a low flow head. Its a bit pricey $60 but looks to be great quality!

A low flow head is essential for this type of setup! A head with a flow rate of less than 2gpm is ideal. The nozzle we purchased came with several little brass disks one specifically for low pressure. The one we purchased also came with a trickle valve. The flow rate is 1.9gpm and works great!

We have found that a cold to hot water ration of 2:1 works very well. So 1 part boiling water and 2 parts tap water. If the hot water is a rolling boil this yields a very warm shower.

Filled to the max capacity of 2-gallons the shower will last for approximately 7 min of continuous flow (depending on how much you pressurize the tank). One full tank is enough for our entire family (two adults and two kids) to shower. If Shae needs to shave we will generally use roughly 3 gallons.

We occasionally clean out the flow disk in the nozzle as even the smallest items can reduce the flow. Paisley inserted toilet paper into the tank once which really slowed the flow down! If your flow is affected it’s probably because the disk is clogged. After a shower we empty the tank then pump the wand to remove any stray water so it doesn’t corrode any of the components.

WHAT DOES THE WIFE THINK?

Shae was skeptical at first but now that we actually have a shower – she loves it! It took a bit to learn to wash yourself quicker but now taking more than a 4min shower seems like too long!

The DIY weed sprayer shower is a great shower solution for camping, prepping, at the beach or like us living in an RV. It doesn’t require a water pump, battery or propane and can be completely off-grid. It’s super simple to assemble, parts are readily available and it’s very affordable.

This solution is probably a temporary one for our family. For a full-time living setup it’s pretty crude for most people. For us it has provided a hot shower and we didn’t need to buy an expensive water-heater and mess with complicated plumbing and installation.